A train fully laden with passengers snakes its way through the jungle on the route from Phnom Penh to Sihanoukville in 1998. AFP

Last Saturday in Phnom Penh, to a crowd of thrilled townsfolk and pushy photographers, Prime Minister Hun Sen boarded a refurbished train at the Royal Railway Station bound for Sihanoukville. It was the grand reopening of Cambodia’s first passenger train in 14 years and, for some Cambodians, it was a kind of revival.

“The train and railway were almost totally destroyed by war more than 40 years ago,” the prime minister posted on his Facebook page during the seven-hour ride south. He typed from a plush booth in the VIP carriage with a small fan on his table. In the back of the car stood a tuxedoed barman.

“Because our country is now at peace, we have the opportunity to rebuild our transport infrastructure,” Hun Sen wrote.

Cambodia’s railway system – two lines that run the western length of the country–has long been plagued by war, political violence and the neglect that spoils most infrastructure in a poor, war-torn country. But even before its abandonment, the railway faced gloom.

In its short lifespan, Cambodia’s 600 kilometres of railway has been witness to kidnapping and murder. It has carried whole cities to slavery and been employed in mass atrocities. 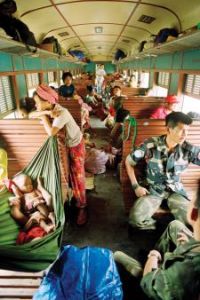 Repatriated refugees on a train from Thailand pass through Kampong Speu on their way home in April 1992, guarded by Malaysian army soldiers. AFP

“Without the trains, it would have been impossible to relocate all those people,” said Youk Chhang, director of the Documentation Center of Cambodia (DC-Cam), which archives the atrocities. “Only a train can do that.”

Chhang was talking about what he calls the “second evacuation”: the forced relocation of Cambodians to different communes around the country, five months after the initial “evacuation” of Phnom Penh in April 1975. Over fewer than 10 days, Chhang said, the Khmer Rouge ran trains “day and night”, transporting a clueless citizenry in cattle cars to work camps across the country.

“Nobody talked on the train,” said Chhang, who was speaking from personal experience. He remembers how, as a 14-year-old, he and his family were herded into an open-air carriage in Takeo province by Khmer Rouge soldiers. They were not told where they were going.

The overcrowded train trundled northward for two days – “So slow you could count the stars”, Chhang said. Despite the horrors – the standing-room-only claustrophobia, the petrified silence, the fear of the unknown destination – Chhang still found unexpected pleasures in the scenery. “The mountains and the palm trees and the waterfalls – it was all so beautiful,” he said.

Prime Minister Hun Sen gets up close and personal with fellow passengers during the first trip of the reinstated Phnom Penh to Sihanoukville service last Saturday. AFP

“Railroads were a key component of Khmer Rouge practice,” wrote James Tyner, a political geography professor at Kent State University, in a book about the second evacuation published by DC-Cam.

“The forced transfer of hundreds of thousands of people both between zones and within zones . . . necessitated a coordinated strategy of mass movement not unlike those utilized by Nazi Germany during the Holocaust,” he wrote.

“Each train wagon was filled with at least a hundred people,” explained DC-Cam researcher Savina Sirik, who has interviewed survivors and written extensively about the evacuations.

“When they reached the destination, people were counted and ordered to get off the train. Some families were separated from one another at each train station. In most cases, they were picked up by ox carts to go to the village where they were assigned,” she said. Chhang described his departure in the same way, and 41 years later, he coloured that train as “a snake which took you all the way to hell”. 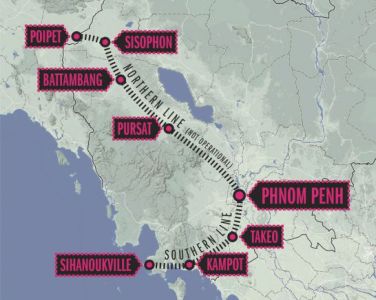 The DK Ministry of Information and Propaganda had a revolutionary song composed for the railway workers, a tune so “brisk and rousing”, said Locard, that composer Him Sophy later included a version of it in his opera Where Elephants Weep. Under Pol Pot, the railway lines transported food and weapons bound for China.

The track was built for trade. According to historian Jean-Michel Filippi, the French unveiled its protectorate’s first railroad in June 1932, the Phnom Penh to Battambang line, with plans of expanding trade with neighbouring Thailand. It took 35 months to build, said Locard.

The line was, as described by the project’s lead engineer Henri Maux in La Belle Aube: Henri Maux, jeune ingénieur en Indochine, 1927-1937, a part of King Monivong’s “great modernisation campaign to develop the potential wealth of the country”. It was a decade that Locard characterised as “the climax of the French achievements in the colonial age.” 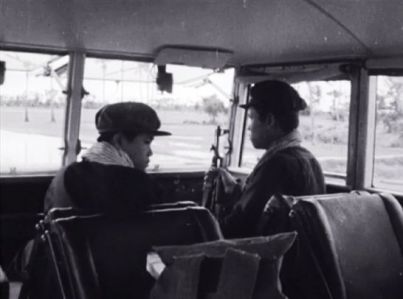 The southern line that extends from Phnom Penh to Sihanoukville was constructed three decades later to deliver goods to the newly built Sihanoukville port. The line was made within a newly independent Cambodia, under orders from then-prime minister Norodom Sihanouk, whose grandfather had overseen the first track. And like the past railway, this one was financed by the French.

After the Vietnamese invaded and sent the Khmer Rouge scurrying into the jungle, the railway was used for freight and limited passenger service. (In the 1998 Rithy Panh film set in that period, One Evening After the War, the opening scene takes place on a train.)

But after Hanoi pulled out and the United Nations poured in a few years after, the line soon became a target for marauding Khmer Rouge militias and armed thieves who had been emboldened by the power vacuum.

During the early 1990s, the train was so regularly ambushed by these gun-wielding bandits that it prompted the Post to title an article Braving the S’ville express.

“[R]ail travel in Cambodia is not an occasion without peril,” warned the correspondent. Assaults occurred so often they became predictable.

“The Phnom Penh to Sihanoukville train is usually ambushed at the same spot, near a coconut plantation about 10 km east of Kampot town,” noted another Post reporter in 1994.

Sometimes there was bloodshed. In July of that year, militants in Kampot ambushed one Phnom Penh-bound train, killing 13 Cambodians and taking three Western backpackers hostage. They were executed two months later.

But not all memories of the train are so grim. Nop Sambok, 80, is a retired repairman who worked at the Kampot railway station from 1959 to 1999 (with a gap during DK). Sambok remembers train travel in the ’60s as a crowded, jovial affair, with regular streams of vendors and travellers.

“I was really happy during that time, because I saw a lot of people using the train with smiles,” Sambok said. “Now it is totally different. I regret that we don’t use trains more,” he added.

But those halcyon days Sambok remembers might not be gone forever. According to John Guiry, chief executive of Royal Railway, which operates the railroad here under a 30-year concession, demand for train travel is high. Passenger tickets for the newly resumed Phnom Penh-Sihanoukville line, he said, have been selling out a week in advance.

His firm plans on opening passenger service on the dilapidated northern line to Sisophon, Guiry said, but it will take some time to repair the tracks.

Until then, the “S’ville express” remains the sole option for the road- and plane-weary traveller (or prime minister). Fortunately, bravery is unneeded. 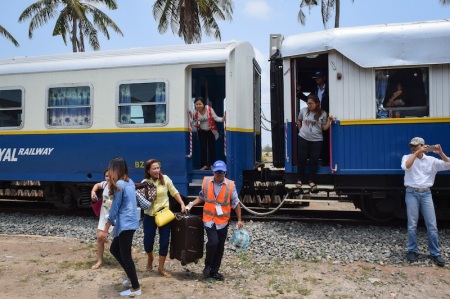 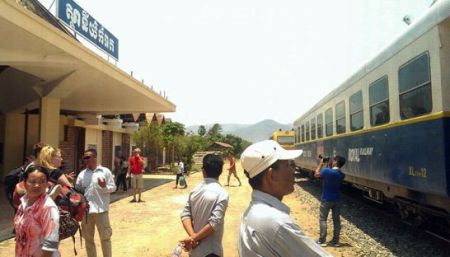 Freight rail shipments have gained traction since commercial rail traffic resumed on the Kingdom’s sole operational railway line in 2013, but Royal Railway, the private company with a 30-year concession to operate the Kingdom’s railway network, is pressing for more growth as it seeks to triple the current volume of cargo.

He said the target is to haul 6,000 containers per month “to get full utilisation of the railway line,” adding that the railway had seen a marketable increase in transport, primarily for rice, garments, fertiliser and cars.

Currently, rail operations are limited to the “Southern Line” that connects the capital and the country’s principal seaport in Sihanoukville. On a busy week, over 650 containers make the 266-kilometre journey.

While freight usage has increased significantly, Guiry said Royal Railway is struggling to turn a profit, with cargo transport fees absorbed by the costs of regular maintenance, fuel and staff salaries. In a drive for efficiency, the company is considering double-stacking rail cars to increase their payload capacity.

According to Guiry, one of the earliest companies to adopt rail transport for its supply chain logistics was Siam Cement Group.

The company ships Indonesian coal from Sihanoukville port to fire kilns at its cement plant in Touk Meas, Kampot province. From there, the bagged cement is hauled to the company’s warehouse in Phnom Penh’s Toul Kork district, he said.

Petroleum has also proven to be a growing commodity, and rail shipments are reducing distributors’ reliance on the more perilous road journey between Sihanoukville and Phnom Penh.

While the railway has solidified a few niche markets, detractors claim gross inefficiency, the low level of scheduled service and costly add-ons have made rail a distant second option for commercial freight shipments.

According to Song Saran, CEO of Amru Rice, rail freight service only picked up in the first quarter of this year on the back of an 8.5-per cent surge in rice exports.

“There was more demand in the first quarter of this year for exports to the EU and China,” he said. “Trucking capabilities weren’t enough, so we had to resort to using the railway.”

“The main shipping cost is about $20 dollars higher than road,” Saran said, adding that this cost was relatively manageable at face value – about $100 per 20-foot container.

However, when the additional costs of delivering cargo to the rail terminal in Phnom Penh and unloading the rail cars in Sihanoukville are factored in, the total cost rises to $120 – about 50 per cent more than shipping by container truck.

Moreover, Saran added, getting cargo shipments to the rail terminals was not just costly, it was inconvenient, while the limited schedule of rail service increased the risk of delivery delays.

“Right now, there really isn’t a competitive trucking service that will take shipments just from the warehouse to the [Phnom Penh] terminal,” he said, adding that companies have to rely on their own trucking capabilities.

“The railway needs to build more terminals and they should have their own tracks to warehouses.”

Nevertheless, Noun Ratana, sales and marketing manager for RDL Logistics, said interest has seen a significant uptick primarily for hauling heavy materials like cement and fertiliser, and particularly when the availability of trucks is strapped.

“However, there are also disadvantages of using this railway, as it is time consuming,” he said. “In the case of urgent shipments, it causes delays for deliveries to our customers.” 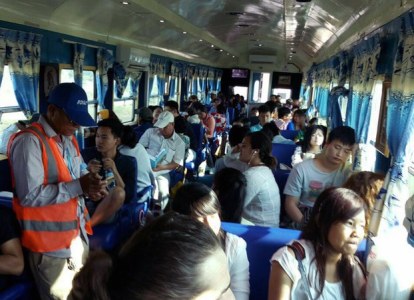 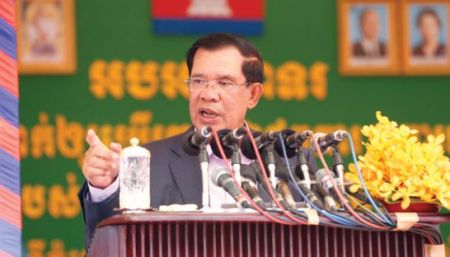 John Guiry, CEO of Royal Railway, the Royal Group subsidiary that has a 30-year concession to operate rail services in Cambodia, said the two companies discussed the potential for developing the Kingdom’s rail network.

“Our railway is now processing, but it is a bit slow, so it is really important to have the Russians supporting us in order to expand the railway project,” he said.

Guiry said the visit comes as the government looks to improve logistics in Cambodia to make production costs more competitive with neighbouring Thailand and Vietnam.

Royal Group previously operated the railway network in a joint venture with Australian listed logistics firm Toll Group. Toll, however, offloaded its 55 per cent stake in the project in December 2014 citing lower-than-expected returns.

Guiry did not disclose whether the potential cooperation with JSC could involve a joint venture, but said further meetings would explore various scenarios.

CCC chairman Kith Meng, who is also chairman of the Royal Group, urged the JSC representative to work together with Royal Railway on developing the railway network. He stressed the importance of improving rail services to benefit the Cambodian people and economy.